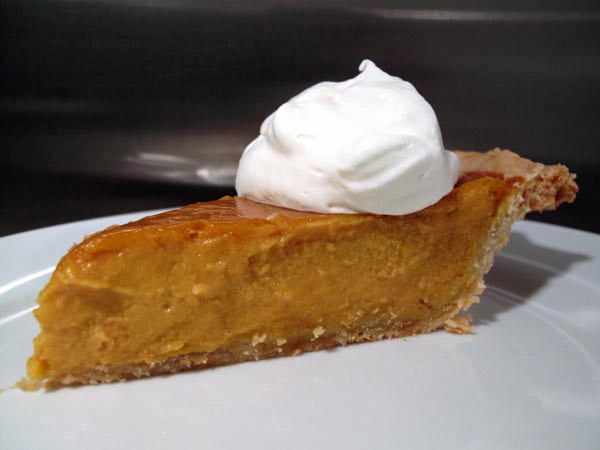 There are tons of pumpkin pie recipes, and in November all of the food shows and magazines are filled with both classic and innovative recipes. I think I’ve tried all of them – most started with canned pumpkin, and then the ingredients vary  - some use heavy cream, others swear by evaporated milk, some are heavily spiced with cinnamon and cloves.  I love pumpkin pie, but have never found what I would call the BEST pumpkin pie until recently. I was watching an episode of America’s Test Kitchen (the leader in test perfected recipes) called “An Old-Fashioned Thanksgiving”. The ingredients and the method were quite original and I couldn’t wait to try it. There are a few extra steps, but well worth it. If you don’t want to make your own crust, you can use a Pillsbury Ready Made crust. Feel free to alter the amount of cinnamon (I used Penzey's Extra Fancy Vietnamese Cassia Cinnamon Click here for Penzey's), but the fresh ginger is key to the pie’s flavor.

1. Process 3/4 cup flour, salt, and sugar in food processor until combined, about two 1-second pulses. Add butter and shortening and process until homogenous dough just starts to collect in uneven clumps, about 10 seconds; dough will resemble cottage cheese curds with some very small pieces of butter remaining, but there should be no uncoated flour. Scrape bowl with rubber spatula and redistribute dough evenly around processor blade. Add remaining 1/2 cup flour and pulse until mixture is evenly distributed around bowl and mass of dough has been broken up, 4 to 6 quick pulses. Empty the mixture into a medium bowl.

2. Sprinkle vodka and water over mixture. With rubber spatula, use folding motion to mix, pressing down on dough until dough is slightly tacky and sticks together. Flatten dough into 4-inch disk. Wrap in plastic and refrigerate at least 45 minutes or up to 2 days.

3. Adjust oven rack to lowest position, place rimmed baking sheet on rack, and heat oven to 400 degrees. Remove dough from refrigerator and roll out on generously floured (up to 1/4 cup) work surface to 12-inch circle about 1/8 inch thick. Roll dough loosely around rolling pin and unroll into pie plate, leaving at least 1-inch overhang on each side. Working around circumference, ease dough into plate by gently lifting edge of dough with one hand while pressing into plate bottom with other hand. Refrigerate 15 minutes.

4. Trim overhang to 1/2 inch beyond lip of pie plate. Fold overhang under itself; folded edge should be flush with edge of pie plate. Using thumb and forefinger, flute edge of dough. Refrigerate dough-lined plate until firm, about 15 minutes.

7. Remove pan from heat and whisk in cream mixture until fully incorporated. Strain mixture through fine-mesh strainer set over medium bowl, using back of ladle or spatula to press solids through strainer. Re-whisk mixture and transfer to warm prebaked pie shell. Return pie plate with baking sheet to oven and bake pie for 10 minutes. Reduce heat to 300 degrees and continue baking until edges of pie are set (instant-read thermometer inserted in center registers 175 degrees), 20 to 35 minutes longer. Transfer pie to wire rack and cool to room temperature, 2 to 3 hours. Cut into wedges and serve. 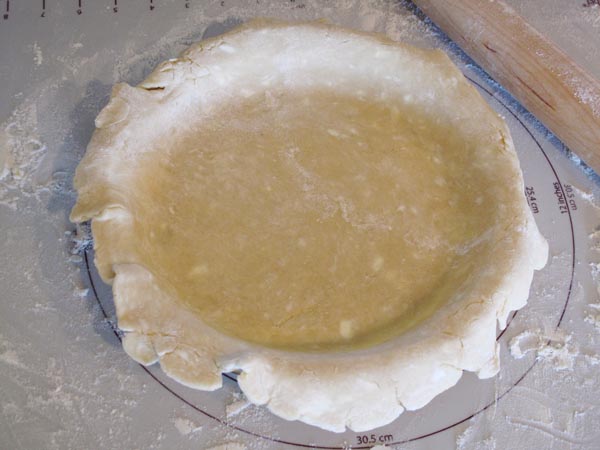 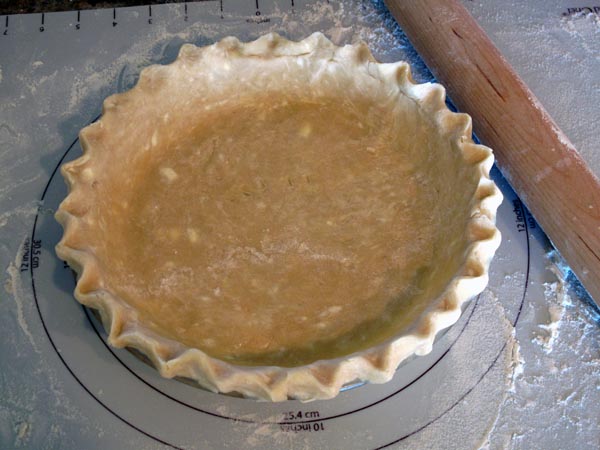 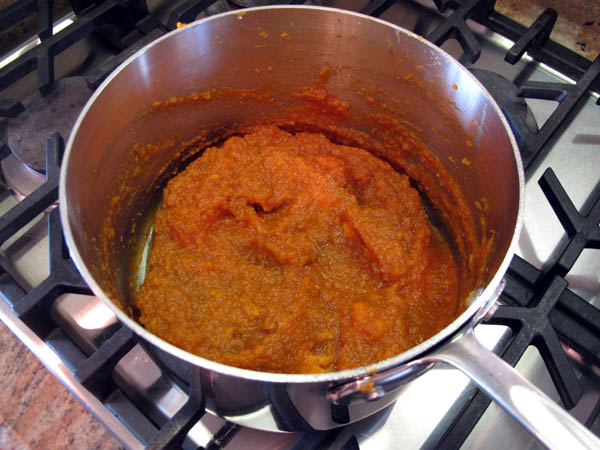 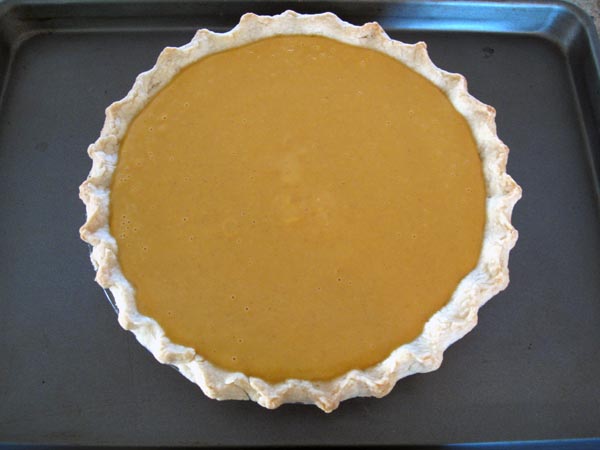 Hi James! Thanks for posting this. I can't wait to try it. I didn't like pumpkin pie until well into adulthood, and since it's something I only feel right making around the holidays (sad, but true), I just haven't found the perfect recipe. I hope this is it.

Hi Anna! Let me know what you think - I've made it twice this week and got lots of raves! I think the yams are the secret :)

I made it last night and cut into it today. It's definitely the best pumpkin pie ever! Mine took longer than 35 minutes during that final round of baking, but I kept monitoring it with the instant thermometer and it did eventually hit 175. I'm going to post my pictures and a link to your recipe tomorrow.

I made CI's pumpkin pie recipe two years ago and was underwhelmed. Though I love their vodka pie crust recipe, the filling of this pie was underspiced. Last year I made what I think was my best pumpkin pie to date (http://judyskitchen.blogspot.com/search/label/Pies%20--%20Pumpkin). As far as texture goes, my pumpkin pies have always been smooth and creamy thanks to the blender or food processor. It's flavor I'm after now -- not overly sweet, not overly spicy. Brown sugar gives caramel undertones which pair perfectly with orange vegetables.

The link I gave you is not working. Here is the correct link for what I think is a better pumpkin pie recipe: http://judyskitchen.blogspot.com/2009/11/traditional-pumpkin-pie.html

Hi Judy - Sorry to hear you didn't like the pie. Did you use freshly grated ginger and Extra Fancy Vietnamese Cassia Cinnamon? I think the ginger flavor and the cinnamon add great flavor without overpowering the pumpkin. I'll give your recipe a try too.

I just made this for Christmas. It was fantastic - but you should add that it is for a deep dish crust, because I had 2 c extra filling since I went with a regular 9" crust. Also, what is the note regarding the candied sweet potato?

hi suzy! glad you liked the pie. I make mine in a standard 9" glass pyrex pie dish - but I fill it right to the brim! Happy Baking! James

Simple and delicious! Thanks again.

This is only a preview. Your comment has not yet been posted.

The letters and numbers you entered did not match the image. Please try again.

As a final step before posting your comment, enter the letters and numbers you see in the image below. This prevents automated programs from posting comments.

Having trouble reading this image? View an alternate.

(Name is required. Email address will not be displayed with the comment.)